“Aisches chayill mi yimtza v’rachouk m’pninim michra/Batach b’alev b’alala v’schalal lo yechsar . . . .” For two weeks in October, the rotunda in Montreal’s Square Victoria metro station rang with these words, sung a cappella in a rich, mild, female voice. The song was broadcast from a tape recorder hidden in a kiosk, and its content, for many, was as veiled as its source. Minimally, one would have been aware that this was an ethnic song, drawn from what Quebecers call a “cultural community.” Perhaps one would have known well, upon entering the space, that the song’s language was Hebrew. Plaques at the rotunda’s entrances identified it as a prayer sung by Orthodox Jewish men before the Sabbath meal in homage to their wives. Untranslated, dislocated, the song was sufficient – or inadequate enough – to make a few passersby stop and weep.

The portrait painting was part of photo to painting, a service sponsored jointly by Paint My Photo and Cobalt Art Actuel, organizers of a city-wide tour of artists’ studios. Recapitulating the now-classic modernist move of taking public space as one’s atelier, Neumark let the site and its transient population shape the art. The concrete ceilings and floors of the rotunda gave the song an eerie, resonant tone. The brick walls lent form and support to the visual component of photo to paintings: a photo-based mural depicting fragments of handmade oil paintings from photos. Cut into hundreds of canvas paintings that conformed to the shape of individual bricks, stuck to the wall by removable oil paintings, the custom portrait from photo could be arranged as the artist had designed it: into a horizontal band that stretched neatly around the circumference of the rotunda, with photos of sculptural heads grouped on one section of the wall, canvas wall art of torsos on another, and images of lower limbs on another. Or the oil painting could be disarranged and recomposed by pencil drawings. One day, two women, invited by the artist to do what they wished to the painting from photo, took it apart completely, until no images into paintings or order were apparent. Each day, a few metro passengers and members of the studio tour elected to move a photo into painting or two themselves, perhaps placing a piece of portrait painting near a virgin’s knee, or returning a bit of hair to a devout mother’s head. 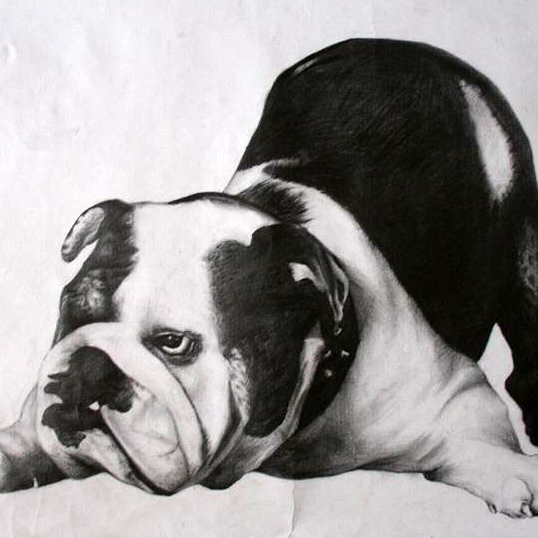 How might an ethnic song, a Hebrew song, a song sung on the Sabbath by Orthodox Jewish men to their wives relate to this public space, this fragmented painted portrait, these picture paintings, fleeting acts? What light can modernist elements like concrete architecture, mechanical reproduction, and the exercise of converting photo to canvas painting, and dog portrait paintings in particular? Viewed from one of the piece’s most interesting paintings of pets, they cast no light at all. In Trace(s), modernist elements served as something other than charcoal portraits. They acted as screens or stains behind which a custom portrait painting from photo – wedding portrait – faded.

Voice has become a primary marker of female ethnicity in modern North American culture, whose Jewish sweethearts are, at present, that grande dame of blockbuster musicals, Barbra Streisand, and TV’s “flashy girl from Flushing,” Fran Drescher. Voice is made to mark an equally caricatural female type in Orthodox Jewish culture: the dangerously carnal woman. Thus, Orthodox wives are forbidden from singing songs in public – religious songs included – on the grounds that they might incite sexual desire in men other than their husbands. In Neumark’s piece, voice also marked femininity, ethnicity, and sensuality; but here these terms were disassociated from big hair, loud clothes, profane blood, and any other typically fetishized Jewish female attributes. The recording of Aisches Chayill – sung by trained vocalist Helene Engel and mixed with the aid of musician Danielle Boutet – contained no hints of the sort of trauma or excess that one tends to search for, fixate upon, and try to own like a kitsch object in contemporary representations of Jewishness and femaleness alike. One apprehended the song as a series of moderate echoic traces, reverberating against unreflective, nonmirrorical concrete surfaces and Christian photo to oil, then fading out.

This fading was accompanied by an enactment of mourning that occurred quite apart from the funereal icons in the space. Indeed, these monumental paintings of glorified Christian femininity had been sent through a computer editing program, where they were twisted, broken apart, and otherwise altered before being sent through a laser printer and cut into hundreds of little brickshaped pieces. Hovering between the extreme poles of ideality and aggressivity, these images suggested what resistance to loss and grief can look like. By contrast, the artist’s performed interactions with the piece showed mourning happening. For short periods each day Neumark interacted with the recording of Aisches Chayill, pacing in slow circles around the kiosk at the rotunda’s center. Sometimes she sang along with the tape in her quirky, alto voice, searching out a harmony with the absent singer or her song. Occasionally she responded to the call of the tape by stomping her feet and shouting out hard, guttural syllables – “chaaaa,” she would yell out. Most often, she paced in meditative silence.

There were many ways to interact with Trace(s). One could fix on its transgressive aspects, attending to how the piece redefined the artist’s studio and metro entertainment in one blow. One could treat the lyrics of its song – which, translated, reference a “woman of valor” who is industrious, wise, strong, and, consequently, worth “far more than rubies” – as affirmative expressions of Jewish feminist identity. One could wonder at the technology the artist had employed, contemplating its hand-painted oil painting from photo like a good citizen of the global village. Alternately, one could weep, as I did, while the syllables “ai-sches-chayill-miyim-tzah” receded behind these things.