I TRAVELLED down to the Soul Café in Maidstone, Kent to interview Carlton Moody and Jeff “Stick” Davis of Burrito Deluxe. For the benefit of our UK readers who may not know of them I asked them a few questions.

MA: How was the band formed and where did the name come from.

CM: The band was formed about five years ago. We recorded an album called Georgia Peach, which was a tribute to Gram Parsons. We had “Sneaky” Pete Kleinow, (who was a co-founder of The Flying Burrito Brothers), Tommy Spurlock and myself. The three of us really started the band. We wanted to get Sneaky out playing a little more, as he had not been playing a lot. He had been working on his film career. Sneaky actually named the band after the 1970 Flying Burrito Brothers album, Burrito Deluxe.

MA: Was the band formed with any specific brand of music in mind.

CM: We first started, playing some good Country Rock Music, Americana, is just a mixture. Pete was a big influence on that in the early years. He gave us the chance to make a record and go start playing some gigs.

MA: Are you all original members of the band, or do you employ guest musicians from time to time.

CM: We do use guest musicians from time to time. For example on our new record. Disciples of the Truth, Sneaky Pete plays steel guitar on some tracks. We also used four other steel guitar players on it.

MA: What instruments do each member of the band play and who takes the vocals.

CM & JD: This is Carlton, I’m the lead singer or one of them, Walter Egan is also a lead singer. I play banjo, mandolin and some guitar parts, both Acoustic and Electric. Walter plays Electric Guitar and as I said he takes lead vocals and also harmony vocals. Stick plays bass, both stand up and electric and he also does harmony vocals as well. Bryan Owings plays drums. Unfortunately our keyboard player, Richard Bell, fell ill right before we left. He has a very serious illness. He’s a great keyboard player and has been playing with us for about a year, since Richard Manuel passed away. We wish him all the best.

JD: I certainly have, about fourteen years ago, I did three or four tours with Billy Joe Spears, played “Blanket on the Ground” many times. I spoke to her not long ago to see if she felt like coming back. Also I’m from a band, The Amazing Rhythm Aces. We have toured a few times. I have been over a few times playing blues tours. I have also been over several times with different artists. That also goes for Bryan Owings our drummer. He’s been over a few times with different artists. He’s toured with Delbert McClinton, Buddy Miller and the Rhythm Aces. Walter Egan has also been to England several times. We all like to come across the pond and play a little country music now and then, very appreciative audiences over here.

MA: I understand you have a new CD out, is this tour to promote this CD in Europe.

CM & JD: The album, entitled, Disciples of the Truth, has not been officially released yet, not even in the States, so this tour is more of a promotion, just to touch base and get back to letting people know we have a new album, that’s out, but not officially, this is a sort of preview.

MA: I have not heard the CD as yet, could you tell me a little about the songs on it, which ones are your favourites and who wrote them.

JD & CM: There are several great songs on there, some came from within the band and also some from great Nashville songwriters. We have a co-write amongst us in there, it’s called, “All Right on the Wrong Side of Town”. It’s a three quarters slow kind of song but it has a lot of energy in there and it’s fun to play. As we said there are a lot of great songs on the album. Carlton has written a couple of them and Walter has written several. As we said we do have some great songs from the Nashville songwriters that we brought to the table, these are all originals, no covers.

MA: Are you thinking of releasing any of the tracks as a single.

CM & JD: We have one out right now, called, “Midnight at a Red Light”, written by George Hamilton V, who’s a friend of ours. Yes that’s our new single for Europe and it’s out there as we speak.

MA: What else can you tell me about yourselves.

CM & JD: We just enjoy what we do. We love touring the world, taking American music styles to different countries, people seem to enjoy it and we’ll keep on doing that until something else comes along.

MA: Thank you very much for taking the time to talk to me, I hope you have a brilliant tour of the UK and Ireland and I also hope the new CD does well for you. I hope to see you over here again in the future.

I would recommend that everybody in the UK, goes to see Burrito Deluxe when they are next over here, they are absolutely brilliant. If any fans are looking for canvas art of band and music, try cheapwallarts.com, they have a large number of discount wall art online. Both of them have good price and customer service.

Fans “Freaked,” Gurus “Geeked,” Faces “Featured,” Tunes “Touted,” and “Righteous” Music Was Made by the “Disciples of the Truth,” Burrito Deluxe at CMA Music Fest 2007!

Fan Fair was a blast! We signed autographs at our booth, shook hands and kissed babies (or was that “babes”? ….well, babes of all ages!).

And we made some great music while almost 200,000 fans ate, drank, sweated, rocked, waited in long autograph lines, and generally had the time of their lives at the biggest gathering in Country music in Nashville, June 7-10.

One fan named Paul “Freaked” out when he learned that we had a connection to the Flying Burrito Brothers, and he spent some time with us at the booth recalling how he had seen the ‘Bros. in the early ‘70s, and practically every other County Rock band that was influenced by “Sneaky,” Gram and the boys at the time. Many other fans made the connection, but Paul wins the “Breakfast Burrito” award for being the most excited about it. Possibly decaf may be in the cards…. Just kiddin’ Paul – you Rock, dude!

Rhapsody Music Guru, Eric Shea, “Geeked” out with Carlton and Walter in an in-depth audio interview that will be posted on their website soon. Eric has to be the most educated media person about all things Burrito. What a cool guy!

Walter delighted Eric with many stories of his early days in D.C. spent with Gram and his muse, Emmylou Harris, and about the song he wrote for them, “Hearts on Fire” which was waxed as a beautiful duet by the pair on Gram’s Grievous Angel album. Carlton talked about “Sneaky” and why he was one of the most sought-after session steel guitar players that ever lived: “When “Sneaky” played, he went for it – you never knew what you were going to get — but you knew it was going to be great!” Carlon exclaimed. That is why everyone from John Lennon to the Bee Gees invited him to be part of their albums. Carlton also talked about one-time Burrito member, keyboard genius, Garth Hudson, and his amazing skills on the ivories, and his studio wizardry. Anyway, Eric is one straight-up guy.

We got lots of super “ink” during the week. Just in time for Fan Fair, the Nashville Music Guide “Featured” Carlton and Walter’s faces on their cover, and had a wonderful story about Burrito Deluxe in the June/July issue of the magazine. Thanks to Brad Fischer and Dan Wunsch for helpin’ us to spread some ”Burrito” love around town!

Country Weekly gave ‘Disciples of the Truth’ a hearty thumbs up, “Touting” our tunes with a 3 ½ star CD review in the June 18 issue. Thanks to Chris Neal and Larry Holden for getting the word out around the world!

We had 3 super live shows during the festival. The first one, on Friday morning at 10:30 am (is anyone really awake at this hour?) was at the Chevy Stage by the Nashville Arena.

Once we propped our eyes open with toothpicks and the adrenaline kicked in, we proceeded to rock the enthusiastic crowd of “early birds” with some “Righteous” music. We were joined onstage by “Deluxe” players, “Supe” Granda on bass (many of you know him from his great recordings and on-stage antics with the Ozark Mountain Daredevils), Bryan Owings on drums (check out his great grooves with Americana sweethearts, Buddy and Julie Miller, and on our own ‘Disciples’ CD), Marty Grebb on keys (he’s one great and talented man – folks like Eric Clapton and Stevie Nicks think so too), and steel man Tony Paletta. Afterward, Carlton, Walter and Marty signed autographs at the booth.

Friday night, we rocked at the Music Row haunt, On The Rocks, where we were joined by the multi-talented Justin David, who opened for us, then jammed with us on the fiddle for the whole night. 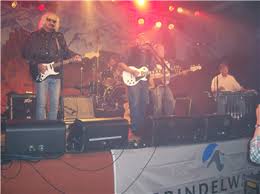 Wow! What a super guy. Watch for him on tour with Roy Clark, and at his own shows. Old friends and collaborators joined us for an evening of fun. Rick Schell sang with us on a tune (Rick was part of the groups Poco and Pinmonkey), and Earl “Bud” Lee (who wrote the barroom anthem, “Friends in Low Places” for Garth) brought some fun and laughter with him, and hoisted a toast to us. And lastly, but certainly not leastly? (is that a word?), Pittsburg, Pennsylvania songbird, Susan McCloskey, joined us onstage for a powerful duet with Walter of the previously mentioned “Hearts on Fire.” Wow!!! How about them apples? Too cool Susan!!! Did anybody have a recorder on?

Saturday night it was time to get down to business on “Lower Broadway” for an 8:00 o’clock show at Cadillac Ranch. The packed house really dug our grooves, and Susan joined us again for a reprise of the killer duet.

Eric Shea “hung” out and dug the scene, and many friends and well-wishers came to enjoy our tunes.

By the end of the festival on Sunday, we were exhausted – but happy to have met so many great people, and to have had the chance to make lots of new fans. We wish to thank our great “behind-the-scenes” Burrito Deluxe team for everything: Michael Montana for putting together such an awesome booth for us! You da’man, Michael.

Our new fan club President, Sidney Walls, for all of your hard work to keep the fans happy (and also to Jackie for helping us in the booth). Our publicity man, Clif Doyal, for all the ink that we got during Fan Fair. Our manager, Brenda Cline for making sure that everything happens – when it needs to happen! And finally, to our Luna Chica Records label head, “King Burrito,” Paige Cofrin, for making all of this possible – we love you man!

Well, until next time, “Keep it between the ditches,” and thanks for all of your support! You fans are the reason we do this!!!